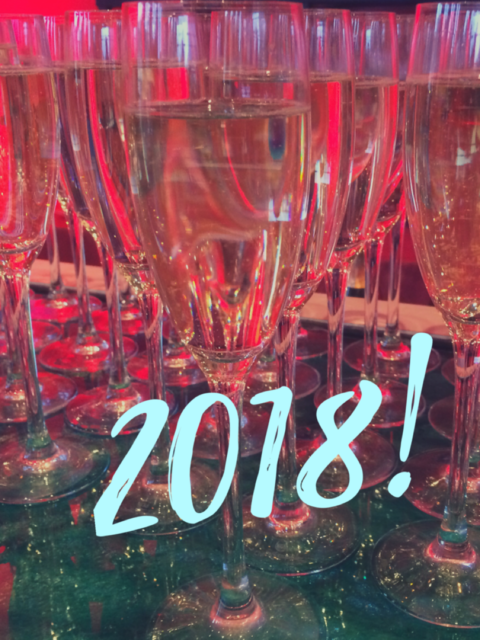 It’s New Years Day, I am sitting in bed with my lap top, covered in quilts, squeezing the last few free moments of my night before heading back to work after being gone for a week. Just like every year, I look back on what I have done, and where I want to go and want to do in the year ahead. 2017 wasn’t bad, it wasn’t great, and I don’t know about you dear reader, I am ready to be on to a new year.

Before we can look ahead, let’s look back:

This was the year of work. I celebrated 14 years at my job; saw my team size double and I took on managing people in a completely new role.  I gave up some responsibilities and had to learn how to say no and delegate more often and for the first time in quite a while, I was in learner role. I feel like I am slowly getting my feet back under me, and that sure feels good.

My side life as a blogger brought me to Portland again for Feast and to Vegas to cover Las Vegas Food Expo, I ate, I drank, and I even picked up some new ink. I worked with a couple new brands, and took time out to write a little more.  A goal I had set last year was to get out and attend more events. While the flu knocked out half of them, I still made some great connections (and of course, ate some awesome food!). This year, I want to keep up with that goal – continue to put myself out there and a big part of that will be writing.

2017 was the year of, “man, I hope this is good enough”. I had days were I felt successes and days where I felt like an utter failure. There were days full of tears and frustrations on not feeling settled and feeling like I wasn’t doing enough. Luckily though, those days were far and few between and at the end of the year, I like to think I left things better than they were at the start. I felt like Dory, telling myself, “just keep swimming”.

2017 wasn’t just about me though!  Nick celebrated 10 years at his job and was able to take a fair amount of time off for Kiddos wild adventures, although there were quite a few 70 hour weeks in there, too. He built hutches, and helped me shovel poop and didn’t look at me (too much) like a crazy person for all the things I wanted to do in my yard.

Also, this was Izzy’s second year of co op preschool, and the first complete year of her life without any surgeries or procedures.

I’ll let that sink in: My kiddo had her first full year of just being a kid and not requiring anything more than any other 4 year old.

Man, I can’t say enough how great that feels. She grew taller, and more brave and sings constantly. She’s quick to be the class mother yet again this year, soothing over conflicts and trying to help the teachers do things. She wears her heart on her sleeve and is so darned amazing reminding me that I am so lucky to be her momma.

In the farm and garden department, we had some losses and had to cull a sick chicken. The chickens we fostered were sent to their new home and the bunnies grew fat and cute, while our hens started becoming free-loaders. I ripped out most of the grass in the front and back yards and replaced it all with play ground equipment, a new bunny house and tons of garden beds. Cuss words were hollered as I pulled out chunks of sod by hand (a good workout, by the way).  The corn grew tall and I planted way too many types of squash and cucumbers. So much that I ended up putting out a box for my neighbors to grab a few as they needed. I tried out quite a few new types of tomatoes, but found that I wasn’t as excited about them, and needed more soil in my beds for them to grow happily.

When we weren’t in the yard or at work, we played in the woods, in the snow, in the sea, and ate our way through the West Coast on a trip to Sonoma. We sat quietly through the loss of loved ones, but also celebrated the birth of babies, and new weddings as well. We cooked new dishes, danced to records and stayed up late into the night playing.

Looking back, it was really the year of just getting through. We had fun, and tasks were accomplished, but there were so many competing priorities, that often times it felt like a blur. No relishing in the moments, no sitting in the quiet, just a lot of go go go, but not a lot to show for it. This wasn’t necessarily a bad thing, but it left me wanting more and feeling restless.

This is my intention for the year.

Those two words seem to start off some pretty amazing things and hold some pretty great potential, so I’ll let them guide me for the next 12 months. No more rushing (as often as I can), more time for friends and creating. More sitting in the quiet, thinking. More of doing what I know I need to do to make my soul quiet and my heart happy. This is the year I hope to just be.

Plus, I still have that damn 40 by 40 list and 6 months to tick some things off.

I’m sure I’ve said this before, but this is the year to butcher at least one rabbit and some of the chickens. We’ll replace those with new ones and begin the cycle again. I’m also going to try my hand at growing new varieties of squash and tomatoes, with some other goodies as well. I’ll be sure to add posts of my progress (the good, the bad and the ugly) as I go.

This year, I hope, will be the year of doing and being versus just getting by. So dear reader, I hope you’ll stick by and watch me as I try to be more (or less if the situation requires).

“Before I can tell my life what I want to do with it, I must listen to my life telling me who I am.”
― Parker J. Palmer